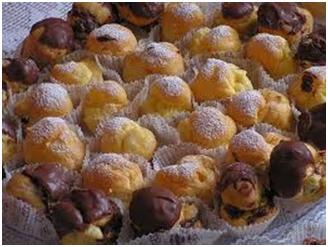 When I say the word, I can actually smell the sugary aroma of the three squared beignets in my plate at Café Du Monde. I don’t think I have ever tasted anything quite like it.

Italian bigné are different. Some are fried, as in the case of the Zeppole di San Giuseppe fritters, but normally bigné are light choux pastry puffed balls that are baked in the oven. These cream puffs are also the base for Profiterole, filled with whipped cream or gelato, and drizzled with lavish amounts of melted dark chocolate.

Bigné were introduced in France by Caterina de’ Medici, wife of Henry II of France, who brought with her from Tuscany lots of recipes, including choux pastry. Leave it to history that the name traveled from Florence all the way to French New Orleans…

I fill my bigné by slicing off the top, filling with a spoon, and then reassembling. It can obviously be done by injecting with a pastry bag and a narrow piping tip, but that always turns out a mess for me.

Today I’m sharing the recipe for a savory hors d’oeuvre version, loaded with a creamy 3-cheese filling, that yields about 24 assembled bigné

Ingredients for the choux pastry:

Start by making your bèchamel, which is the base of the filling.

Melt the butter in a stainless steel pan over low heat. Gradually sprinkle in the flour, and stir well with a wooden spoon until smooth. Cook gently until the mixture becomes a light golden color. Add the boiling hot milk gradually, stirring constantly to avoid lumps. Cook for another 15 minutes (at least) while stirring constantly.

When the bèchamel becomes rich and creamy in consistency – not too thick and not to runny, rather forming ribbons on the surface as it dribbles off the wooden spoon – remove from the heat, and dilute with a little more milk. Don’t pour it in all at once, rather use it to blend the cheeses as you add them, and they melt and bubble.

Fold in the pecorino and parmigiano first, leaving the fontina last.

When all the cheeses are blended and well incorporated, let the mixture stand to cool while you make the choux pastry.

Pour yourself a drink, by now you’ve totally earned it.

Heat the water with a pinch of salt. When it begins to tremble, right before reaching boiling point, add the butter and let it melt. Sift in the flour, remove the pot from the stove, and stir constantly until the dough comes away from the sides of the pan and forms a smooth ball (this will take about 5 minutes, have faith: it will happen). Let it stand to cool briefly.

Once the dough is lukewarm, start adding one egg at a time and mix with a wooden spoon until it reaches a smooth, paste-like thickness. I cheat and give it one last whir with a food mixer.

Spoon the bigné dough onto a baking sheet lined with parchment paper. Again this can be done with a pastry bag, I use two spoons…

Bake the bigné for about 15 minutes, until golden and well-puffed, time greatly depending on oven force. The trick to perfect puffing bigné is to keep the temperature quite low and steady. Ventilated ovens are the best. Mine isn’t…

Once your bigné have completely cooled down, using a sharp serrated blade, slice the bigné open as you would a bun, and slather 1 tablespoon (or more) of the creamy cheese filling in each, reassembling as you go along. Any leftover filling can be employed as dip for crudité, or spread on crostini, bruschetta, etc.

Serve at room temperature, or slightly warmed (20 seconds in the microwave) and pour the red wine with profuse abandon.

Another easy filling (which doesn’t need cooking) is a blend of equal parts cream cheese and Gorgonzola. Dreamy.